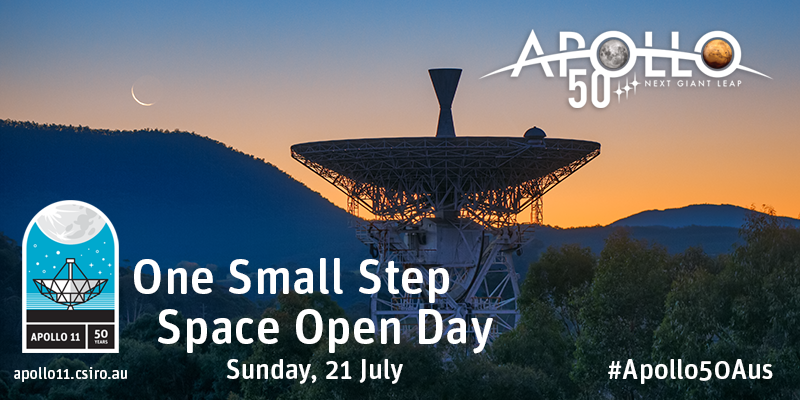 50 years ago a group of Australians working at a tracking station nestled in the hills of Canberra, received and broadcast the TV images of Neil Armstrong’s first steps on the Moon.

Today, here is your chance to relive that moment under the actual antenna dish that helped make that historic moment possible. Join us at our FREE open day at the Canberra Deep Space Communication Complex.

Join us as we re-broadcast on a big outdoor screen and at two indoor locations, timed to coincide with that moment exactly 50 years ago when Neil Armstrong took that first step onto the surface of the Moon at 12:56pm (July 21, 1969)

We will screen the entire 2.5 hour Moon walk as it happened in ‘real-time’:

Limited seating at each venue, so we recommend getting in early. The video will start at approximately 12:30pm AEST.

Our Visitor Centre will be open from 9am to 5pm, with our exhibit of Apollo related hardware and memorabilia, plus the larger exhibition on other space missions and the role of the CSIRO-managed, NASA deep space facility.

The special open day continues at antenna dish – Deep Space Station 46 which received the historic lunar broadcast. Open to tour from 10am to 4pm, it will be the focus of our celebrations.

We will be giving away special Apollo 50th anniversary posters and stickers, and other space goodies – limited stocks available.