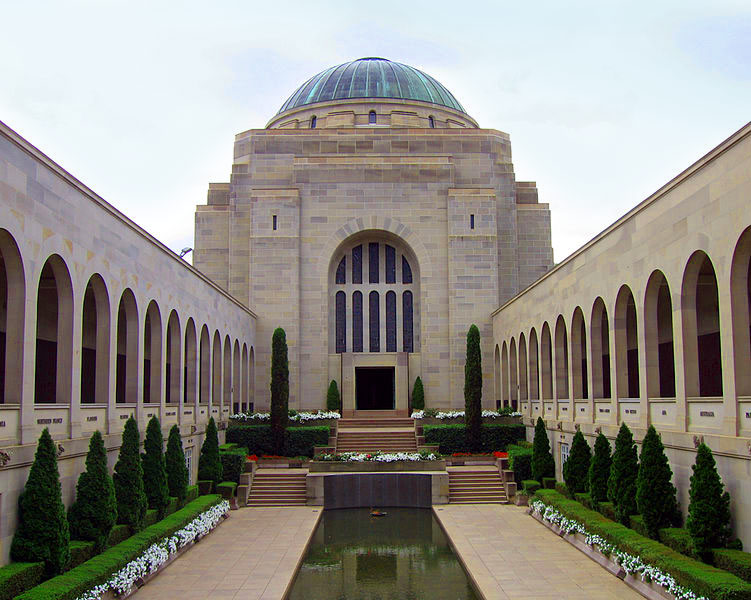 Join us the for National Peace Project at the Australian War Memorial in Canberra as we form a giant Peace Poppy on the forecourt in Remebrance for the Centenary of Peace Day.

As numbers are strickly limited, registration of each school aged participant is essential. Each participant will recieve a numbered certificate of involvement.

Each registered participant and school will receive a numbered certificate to commemorate their involvement.

What to wear and What to bring

Participants will need to wear a red top or T-shirt (and a red hat if possible). Please also bring a water bottle and some snacks. Backpacks will need to be kept with parents/guardians or teachers during the actual event as there is nowhere in the education space to store bags.

The Education Team from the Australian War Memorial have been working closely with the OZY Youth Choir Honouring Defence Service to create a deeply engaging educational experience for all involved. The afternoon will include an educational tour of the Memorial with special reference to the 15 Values in the Hall of Memory, a procession from the Hall of Memory through the Commemorative area to the forecourt outside the Memorial, the forming and filming of a giant peace poppy on the forecourt and singing together as an “improptu” Peace Choir.

The Peace Project 2019 is an opportunity to engage as many young people and their families around the nation to:

Gallery program to be delivered to students during their visit on 19 July: We will remember them Program outline: This program explores the reasons why we continue to remember the service and sacrifice of Australian servicemen and women, particularly on Anzac Day and Remembrance Day each year. Students will investigate the symbolism of the Memorial’s Commemorative Area, identify a name on the Roll of Honour, and explore the Hall of Memory, noting the values included on stained glass windows. They will also have the opportunity to visit the galleries, hearing stories of those who have served in various conflicts in which Australians have served. Suitable for primary and secondary school students (Year 4 – 12). This program is adapted by education staff to suit students at different learning levels.

Participants, as part of the event will form an improptu “Peace Choir ” whist in the Poppy formation and will sing two songs. You/your students do not need any prior singing or music experience to take part in this special “choir”.

We will have soloists and small groups sing the verses, so “the Peace Choir” will only need to join in the choruses. If you don’t have time to practice the songs, we can assure you the choruses will be able to be picked up on the day! You will receive a copy of the songs once you have registered. If you have a school choir and would like to practice and/or perform the songs at your school, you will also have access to the music, lyric sheets and rehearsal tracks should you wish to use them.

We will record the event and produce a video of the event.

2019 CENTENARY OF THE YEAR OF PEACE

Peace and the End of the War
It was 1919. The war had finally ended. Our wounded soldiers were returning home shadows of their former selves with their families and communities still raw from indescribable grief and loss. It was amid all this that the women and children of Australia still found strength to celebrate the end of war and to celebrate peace.

From fundraising flower days and fairs to dances and peace parties, from church services and concerts to huge Peace Marches across the nation, Australians found ways to celebrate a return to peace as “the boys” (and girls) came home. However, these were not the delirious peace celebrations of 1918, they were a sober coming together of celebration and commemoration for the first time as the nation enjoyed peacetime whilst coming to terms with indescribable grief and loss and the enormous price that had been paid.
A Peace medal was issued to every school aged child, Children held Peace Parties and ran fundraising days as they raised money for veterans and woman’s organisations such as the Red Cross and soldier’s repatriation funds.

The Treaty of Versailles, signed on 28 June 1919, formally ended hostilities. To mark this final ending of ‘the war to end all wars’ major buildings were decorated with flags. On 30 June church services were held and Australian and British ships fired a 101-gun salute in Sydney Harbour. Official celebrations were held on Saturday 19 July, which was declared ‘Peace Day’ throughout the British Empire. On the Friday many schools held ceremonies, often including recognition of teachers or former pupils who had served or died. In some suburbs, such as Annandale, Petersham and Redfern, a number of schools combined for joint ceremonies of commemoration including marches and sports carnivals. All schoolchildren were given a peace medal to commemorate the end of the war. [11]

On Peace Day in Sydney major buildings were decorated, bells were rung in churches and public buildings, and huge crowds flocked to the city. Unlike the delirious rejoicing of November 1918, this was a sober celebration and recognition of the huge sacrifice of death and disability among those who served. Indeed, some objected to any celebrations and urged that the money be spent instead to benefit the children of fallen soldiers. The government eventually agreed to scale back its initially ambitious plans. [12]

The major event was a march through the city by more than 10,000 sailors and soldiers, Red Cross and other war workers, a parade which stretched for more than three miles. ‘There can never be another sight like it’ proclaimed the Sydney Morning Herald. At 11.30 am the parade halted, the bands and choirs played and sang Kipling’s ‘Recessional’, joined by many spectators, bugles sounded the ‘Last Post’ and three minutes of silence were observed across the city in commemoration of the fallen. A 21-gun salute was fired from the Domain at noon. The afternoon was given over to a regatta on the Harbour and a variety of sporting events. At night, buildings and ships in the harbour were illuminated, there was a fireworks display, and a chain of bonfires was lit around the Harbour and in many suburbs. Although it had been hoped that similar activities could be held in the various suburbs, Sydney was the focus for the day’s activities, a fact which caused some complaint. [13]

Many special religious services were held on the Sunday, either in individual churches or as combined services in local parks or halls, often in conjunction with parades of children and returned servicemen. [14]As had occurred in 1918 when the peace treaty was signed, prisoners were granted remissions of a portion of their sentences, including five military offenders who had been convicted of desertion.